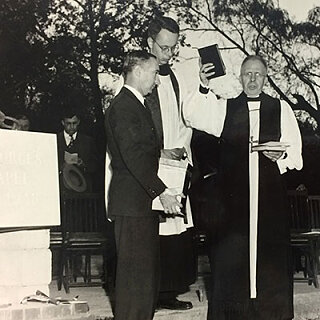 The Great Depression of the thirties and World War II in the forties interrupted the activities of many building projects. The new church was postponed until December 1944, when William H. Lambert was made chairman of the committee. On May 27, 1947, The Rev. Peyton R. Williams announced an anonymous gift of land on which a church was later erected. The donors were Mr. and Mrs. Brownlee O. Currey, who lived in the large French style house on the hill above the donated property. When the Belle Meade Committee of the Davidson County Planning Committee was formed in May 1947, Donald W. Southgate, the architect, began sketches for what was to be a Sunday school building for 250 children, plus a small chapel to seat 50 people. But by October 1947, these plans had been recognized as grossly inadequate and the size of the chapel was doubled. By the spring of 1948, the plans were revised upward again to allow the church proper to seat 300. The parish hall was also redrawn and enlarged The Greek Revival chapel was then built without delay, with Donald Southgate as the architect and W.F. Holt and Sons as contractors.

The cornerstone was laid on Sunday, October 20, 1949 by The Rev. Peyton R. Williams, Bishop Dandridge, Bishop Coadjutor Barth, and The Rev. Mr. Mitchell, who became vicar at the end of the service. A Bible, a Prayer book, and other documents were placed in the cornerstone. St. George’s became a parish in January 1952. 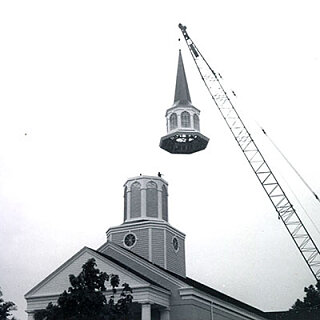 St. George’s continued to grow with the addition of a Sunday school building in 1954, the Jane Tompkins Weeks Memorial Chapel in 1967, and a new nave, sanctuary and sacristy in 1986. In 1988 the East Window was fabricated and installed by Wippel Mowbray Studios, Exeter, England. The original design was created by the Rev. James L. Johnson and executed by Mr. Claude A. Howard of Wippel Mowbray. All glass was hand-blown in England and France in the traditional method. This lovely window is a gift to St. George’s from Mrs. Kenneth E. Rush in memory of her husband. In 2000, St. George's added a new administration wing, bringing our physical footprint to more than 85,000 square feet. 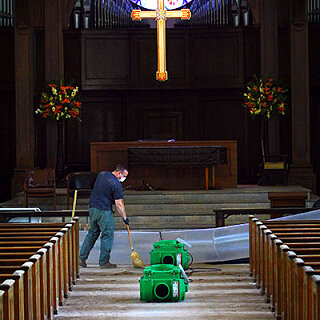 In 2010, Nashville was ravaged by rainfall of over 13 inches in two days. On Sunday morning, May 2, a small group of dedicated worshipers gathered for the 7:30am church service, braving the downpour and early signs of flooding. As they were preparing to celebrate the Eucharist, water began to seep inside the church doors. The congregation raced to save as many valuable items as they could from the water. When there was nothing more to be done, the group retreated to the second floor and gathered once more to celebrate the Eucharist together.

In the hours to come we faced the devastating loss of stalwart and beloved church members Frankie and Bill Rutledge who perished in the flash flooding. As we struggled with the loss of our dear friends and the physical damages to our church home, we also united in kindness, compassion, and generosity toward one another.

We embarked on our mission to restore the church facilities, plant seeds for future ministries, and reach out to our community. Through a three-year campaign called Living Waters: Our Source and Our Strength, St. George’s was able to accomplish this important work. One of the most enduring fruits of this labor is St. George’s Enterprise Ministry, a direct result of money tithed out of the Living Waters Campaign. 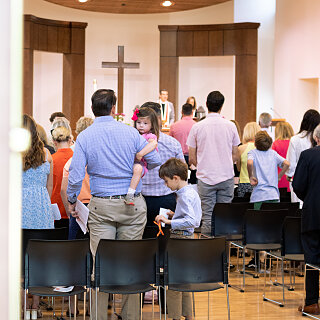 The Next Chapter in the Life of St. George's Episcopal Church

In 2019, after six years of prayerful discernment, St. George’s embarked on a campaign to grow our parish in order to better serve and minister to Nashville. Through generous contributions, these building improvements will allow us to:

The final work in this campaign will be completed in 2022. We look forward to the ways these changes will allow us to expand our reach and service to the greater Nashville community. St. George’s continues to be a thriving parish and is committed to a vision of shared life together. And we strive daily to embody our stated mission to receive, live, and share the abundant life of Jesus Christ. We invite you to join us in this mission.